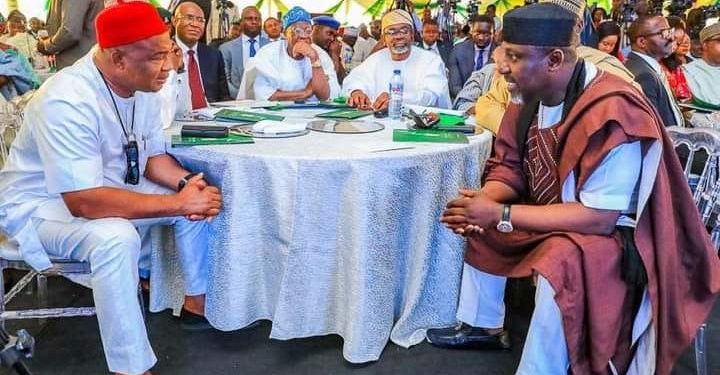 Former governor of Imo State and Senator Representing Imo West Senatorial District, Senator Rochas Okorocha has called on the Inspector-General of Police, Mr. Mohammed Adamu to investigate the “Police Personnel” in Imo Government House to see whether they are genuine police men or fake personnel in Police uniform, stating that Governor Hope Uzodinma has Continued to use them to carry out so many nefarious activities no genuine police man or woman would subscribe to.

Okorocha who had spoken on Monday, February 22, 2021 to newsmen when thousands of Imo people came on solidarity visit to him, following the ugly incident that happened on Sunday, said that Governor Uzodinma has Continued to create unnecessary tension in the state even when there was no need for that, adding that he has also continued to go the wrong way and might not end up well.

His words, “Imo today is very unsafe and unsecured. Tension everywhere in the state. Look at what is happening in Orlu, for the first time in history, after the war. See what is happening in Oguta. I think he wants to make everybody fear him. Nobody will fear him. That was why he got a law passed for him by the State House of Assembly empowering him to arrest and detain Citizens at will”.

He Continued, “When I heard that Policemen had taken over Royal Palm hotel, I called the Commissioner of Police to find out if his men were the ones there, he said he had not sent any Policeman to the place. I called the Deputy Commissioner of Police, he gave me the same answer. I called the State Director of Security Service (DSS), the answer was the same. I said, let me go and see the Police people at the Hotel and know where they came from, since the CP, DCP and Director SS had all denied knowledge of the presence of the Security Personnel there.

“I got there, asked the “Policemen” there who sent them, they said they came from the Government House. That they were sent by the governor. That was at the point we were, when the governor’s Special Assistant on Special Duties, Chinasa Nwaneri and the Senior Special Assistant on Youth Affairs, Eric Uwakwe arrived with buses loaded with thugs, armed with matchets and guns. And the same Police people from Government House aided the thugs in matcheting and shooting my aides. No trained Policemen would have behaved or acted the way they did. That is the reason I am calling that they should be investigated,

“I also call on the IG to arrest Chinasa Nwaneri and Eric Uwakwe. The ugly events that have characterised the government in the State have shown that there is total breakdown of law and order. The Security of the State has broken down. All the heinous crimes we fought to standstill, have all come back to the State,

READ ALSO:   Why Boko Haram Couldn't Be Defeated During Our Tenure - Ex-Service Chiefs

“I had requested my wife to come home and invest. And that was the reason she brought her furniture business to Owerri and built that hotel. I also asked my children to invest here because I believe in the state. I had decided not to go the other way last sunday to avoid people losing their lives in an incident involving me. Otherwise, if I had allowed my aides to make the calls they had wanted to make, the story would not have been the same today.

“A governor who came through the Court should show respect to matters in the Court. And should not engage in self–help against matters in Court. Since he came to office, what he has achieved so far are demolition of Somto hospital, tunnels, roundabouts and left them abandoned. Roundabouts that brought safety and beauty to our Society,

“Rather than making peace, he wants to govern by intimidation and harassment. A wise governor who has not paid his workers, his teachers, who has not paid Pensioners, ISOPADEC workers, at times he would pay some and leave some, should at least have the Civility .

“I appreciate the Presidency for its intervention in the matter. Otherwise nobody would have imagined what would have been the situation yesterday and today. I thank the Presidency. I governed Imo State for eight years and there was no incident of me arresting anybody. But today, it is on record that he has arrested so many people and detained them, including a widow, Assembly member, Journalists, workers etc. He should not take Imo people for granted. I urge Imo people to remain calm and watch. Nobody is disturbing him. Not one single project. He cannot be judged by the number of people he arrested or locked up or how many properties he invaded, but by his performance. Let him do one project we can see”, Okorocha Stated.

BBN’S Erica Slams Troll Over #EndSars Protests: “You Need A Cold Drink For Your Fried...