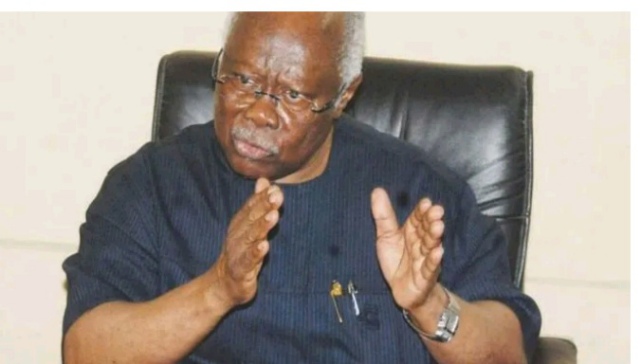 A former Deputy National Chairman of the Peoples Democratic Party, Chief Olabode George, and two other members of the Omo Eko Pataki Forum, has alleged that the Governor of Lagos State, Mr Babajide Sanwo-Olu; his deputy, Dr Obafemi Hamzat, and many top political office holders in the state are not natives of Lagos State.

The members of the forum claimed that the senators representing the state at the National Assembly – Oluremi Tinubu and Solomon Adeola; Speaker of the state House of Assembly, Mudashiru Obasa; the Secretary to the State Government, Mrs Folasade Jaji; and the Head of Service, Hakeem Muri-Okunola, are also not from the state.

The forum said these in an advertorial, titled, ‘Lagos: The imperatives of cultural renaissance’, signed by Chief Bode George as the leader of the forum; Major General Tajudeen Olanrewaju (retd.), a former GOC 3rd Armoured Division, Jos as a trustee of the forum and Mr Gbadebo Dallass, a former managing director of the National Economic Reconstruction Fund, as another trustee.

In the advertorial published in Sunday PUNCH of June 14, 2020, the members of the forum lamented that the “legendary accommodating openness” that Lagos State is known for was becoming a curse, noting however that they would no longer watch the state become a no-man’s-land where anything goes.

The advertorial reads, “From the years of Brigadier Johnson to that of Brigadier Marwa, all those who governed Lagos State gave the natives their natural pride of place and presence in the governance of their soil.

“The representation in power equation was equitably distributed along the traditional lines of IBILE. It was genuinely inclusive of all shades and colours of our multi-rainbow society. The major divisions as represented in the acronym called IBILE were all given equal and adequate representation in the governance of their state.

“Not anymore! The 1999 aberration which witnessed the emergence of Mr Bola Tinubu changed the old order. Lagosians are now reduced to almost second-class citizens on their native soil. Their inalienable right of self-determination, which is guaranteed by our constitution, has been largely voided, dismantled by a solitary usurper.”

The group said its position was void of prejudice but that it couldn’t ignore what it called the truth and scary realities, noting that the present political and administrative structures in the state were hardly representative of the will, purpose and summative identity of the people.

They added, “From the acme of governorship power in the Round House in Alausa to the seat of the Deputy Governor, from the three senatorial incumbents (Bayo Osinowo who represented Lagos East is now deceased) to the Speaker of the House of Assembly, the SSG, the HoS – none of the occupiers of these crucial positions is a native of Lagos State.

“Where else in this country can this kind of odious and sickening anomaly happen without an uprising? This flies in the face of equity and fairness. This is not right. This is not just.”

They added, “Like George Floyd, they are kneeling on our necks. And we cannot breathe! From politics to administration and now our culture, they are mangling our indigenous identity. This evil has gone full circle.

“The glaring interference in the Oniru stool has added a new dimension to the deliberate erosion of our cultural identity. One brazen Supremo now decides who becomes a governor and who occupies a royal seat.

“We as indigenous natives of Lagos State feel endangered. Surely, we can’t continue like this. The tradition of complicity and silence is over. Let us all rise to defend what is ours by birth, by ancestry and tradition.

“Enough is enough. We find it repugnant and absolutely unacceptable the reduction of Lagos State to a no-man’s-land where anything goes. O to ge!”

In his response, the Chief Press Secretary to the governor, Gboyega Akosile, faulted the claims, noting that Sanwo-Olu’s parental home on the Lagos Island was well known to people.

He added, “Clearly, the governor and these people they mentioned are Lagosians of first order. Everyone knows the governor’s parental home on Lagos Island. However, this is not the time for us to talk about who is a Lagosian or who is not.

“Whoever is behind such is looking for social and political relevance. They should rather join hands with the governor to move the state forward instead of debating about who is from Lagos or not.”