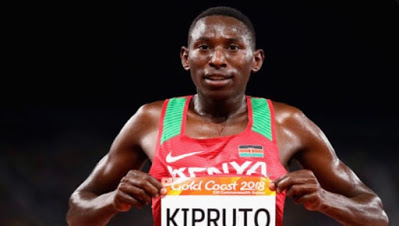 Olympic and World 3,000m Steeplechase Champion Conseslus Kipruto has been charged with defiling a 15-year-old minor in a Kapsabet court.

The world-renowned athlete was charged on Monday, November 16, with defiling a Form Two girl and released on Sh200,000 cash bail after pleading not guilty.

The defilement incident was first reported by K24 Digital on Friday, October 30, when the minor’s parents filed a report at Mosoriot police post accusing the athlete of eloping with their daughter three days earlier.

The minor’s parents alleged that their daughter, who went missing from home, was putting up at the athlete’s home in Chesumei.

Upon returning home after three days, they interrogated her seeking an explanation on where she had been.

The girl allegedly refused to disclose where she had been but the insistent parents examined her phone log where they discovered that she had been in frequent communication with the Olympic champ.

It was then that the teenager allegedly disclosed that she had been putting up at the athlete’s home.

Immediately, the parents filed a report at the Mosoriot police post alleging that their girl had been defiled.

Confirming the filing of the police report at Mosoriot, Chesumei OCPD Bosita Omukolongolo said he couldn’t immediately establish the age of the girl.

“A report was filed at Mosoriot Police Station by the girl’s parents, who are complaining that Kipruto defiled their daughter. We cannot immediately confirm whether the girl is a minor or an adult. However, we are looking for the athlete whose whereabouts remain unknown,” Omukolongolo told K24 Digital.

“Upon arresting the suspect, we shall record his statement and thereafter conclude investigations into the defilement allegations,” said the OCPD, revealing that the alleged defilement victim has been taken to hospital for examination.