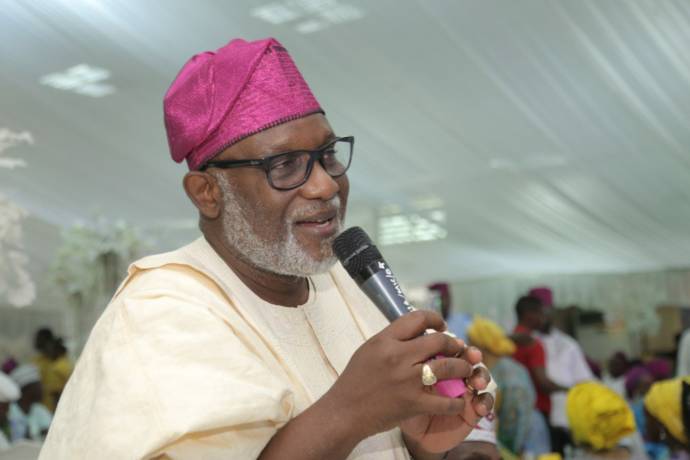 Ondo State on Monday turned back a large number of almajiris who came into the state.

PREMIUM TIMES gathered that the children who were about 25 in number, were driven into the state by a truck driver.

Almajiris are children who are sent to go live with Islamic clerics from whom they learn about the religion. Thousands of them, however, end up as street children without access to education or health care.

The almajiris, according to police sources, walked through bush paths after entering the state to beat the blockades by security officials enforcing the lockdown directives, before reentering the truck after finding their way back to the expressway.

The state governor, Rotimi Akeredolu, first raised the alarm of almajiris pouring in from northern states on Monday while he was updating residents on developments regarding the efforts of the government in curtailing the spread of the disease.

He had lamented the porousness of the entry points into the state, manned by security agencies in line with the restriction of movement order.

Mr Akeredolu had noted that “some states in the Northern Nigeria are already deploying almajiris to other parts of the country.” He, however, did not name the states where the alamajiris would be coming from.

He called on residents to be vigilant and report any unusual large population of young people imported to the state.

“As I said earlier, undesirable penetration at the borders and disregard for social distancing remain our low points,” he said. “Reports and daily briefing support these facts.”

Tip
A source at the Ondo State government house, hinted that the government got the information on the movement of the almajiris and notified the security agencies to swiftly ensure they were not allowed.

“We cannot allow them in, they have to return to where they are coming from,” the source said. “The government already had the information and that led the governor to make the statement on the matter.”

Meanwhile, the Police Public Relations Officer of the Ondo State Command, Tee Leo-Ikoro, confirmed that the group of young men were intercepted and “have been taken out of the state.”

Mr Leo-Ikoro said the young men said they were coming from Sokoto State and had come in through Kogi State which shares boundaries with Ondo State.

“This afternoon, we took them back to the boundary between Ondo and Kogi, because they said they came through a village in Kogi State,” the police spokesman said.

“We have to take them back to the boundary and asked them to return to Sokoto.”

He also said they have gotten directives to block the bush paths where the almajiris had cut into the major roads in order to ensure none of them returned to the state.

“With the blockade of those paths, because they know all the bush paths, we have ensured that no one is allowed to go through it. They were returned in the same truck they came in with.”

A similar action was taken by the Osun State government when it returned a large of number of youth, who were described as illegal miners from Zamfara State. This had attracted a backlash from the government of Zamfara.

Osun had last week expressed concerns over the large number of northern youth, pouring into the state.

The deputy chief of staff to the Governor of Osun State, Adeyanju Biniyo, had observed that the northern youth “were sneaking into the state and were undermining efforts to check the spread of the coronavirus.”

The government of Zamfara State had criticised the Osun State government for the ‘deportation”’ saying it was in bad taste and unlawful.

It had also argued that the youth had the right to reside in any part of the country.

But the government of Osun State had explained that the action was part of its efforts to curb the spread of the COVID-19.

Nigerian laws permit any national to live in any part of the country but in the wake of the deadly virus which has killed close to a 100 persons in Nigeria, many states have sealed their boundaries making it increasingly difficult to access for both residents and non-indigenes.