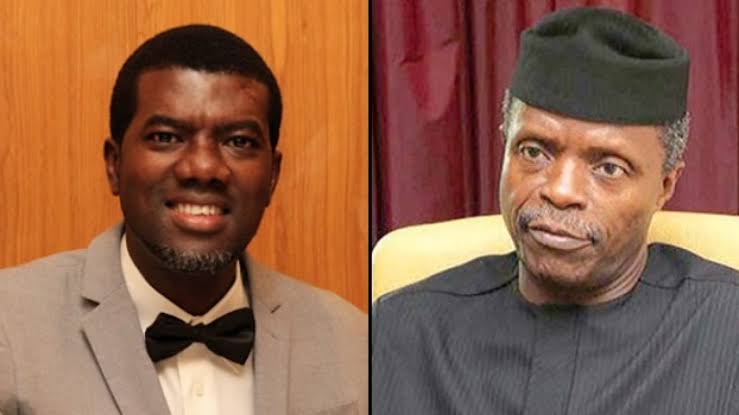 As the defamation suit of Vice President Professor Yemi Osinbajo through his lawyers against online publisher Jackson Ude continues to generate mixed reactions among Nigerians on Social Media. Former spokesman to Ex President Goodluck Jonathan Mr. Reno Omokri has lent his voice to the saga.

According to the statement he made on his verified Twitter handle, Mr. Omokri said:

Pastor Yemi Osinbajo should sue @JacksonPBN to court for slander. That is the behaviour of an innocent man. Why petition @PoliceNG? Did the suspended Chairman of @OfficialEFCC, Magu, pay you ₦4 billion? If it is truly a lie, then head to court, not to police!

Mr. Omokri is of the opinion that the Vice President should head to court if he thinks that the allegations made by Jackson Ude is false and not the Police. The Social Media Influencer went further to state that Yemi Osinbajo lied against Ex President Goodluck Jonathan but Jonathan did not intimidate him with the Police rather revealed facts to prove him wrong. He asked Osinbajo to come out with facts with the allegations made against him.

Jackson Ude who is the publisher of Point Black News in the wake of Presidential panel Ibrahim Magu is facing against alleged siphoning of some money he recovered published an article where he accused the Vice President of receiving the sum of 4 billion naira from the 39 billion naira Magu allegedly siphoned.