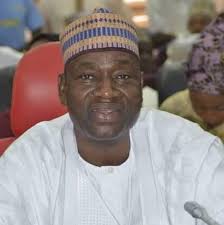 The Secretary to the Government of Niger State (SSG), Ahmed Ibrahim Matane has appealed to bandits to embrace dialogue, reconciliation and lay down their arms.

The SSG who accompanied Kaduna-based Islamic scholar, Sheikh Ahmed Abubakar Gumi to meet the bandits stated the readiness of the government to engage them in dialogue.

Citynews Nigeria learnt that just as the bandits give conditions for peace to reign in the state saying that the government will need to release their men who are being held by security agencies.

Matane addressed the bandits and their commanders in Dutsen Magaji, Mariga Local Government Area of Niger State urging them to embrace peace dialogue being initiated by the government.

He said that the peace dialogue will bring an end to the security challenges faced by the state.

Matane further appealed to the bandit Commanders to support government’s effort in securing the release of the abducted passengers of Niger State Transport Authority mass transit and the Students of Government Science College, Kagara.

He said that religious leaders and other stakeholders would be included in the engagement of bandits, kidnappers, and cattle rustlers in peace initiatives initiated by the government.

In his remarks, Kaduna-based Islamic scholar, Sheikh Ahmed Abubakar Gumi expressed optimism that dialoguing with the bandits will put an end to the current insecurity in the State and country at large.

Gumi reminded the hoodlums that Islam is against taking the lives of innocent people and appealed to them to embrace peace by laying down their arms.

He said that he will continue to discuss with the state government to explore whatever assistance and support government will give to them with a view to achieving the set objectives.

Some of the Commanders in their separate remarks applauded the state government for the peace process.

The highlight of the occasion was the distribution of Islamic Books to the Bandits by Sheikh Ahmed Gumi so as to teach them the doctrine of Islam.