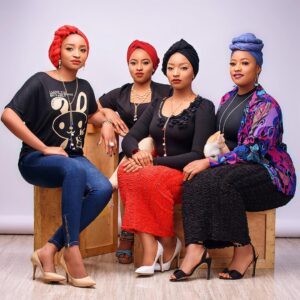 The police has invited renowned Kannywood actress, Rahama Sadau, for questioning after her pictures triggered verbal attacks on prophet Muhammad.

The actress became enmeshed in controversy last week after sharing her some racy pictures on her social media handles.

The pictures sparked outrage among northerners with many saying her dressing reeks of impropriety.

However, some southerns questioned the position of northerners on her outfit, a virtual confrontation that morphed into blasphemous remarks on prophet Muhammad.

Ms Sadau later issued apology, pulled down the pictures and condemned the blasphemy.

An authoritative Kannywood magazine, FIM MAGAZINE, on Saturday reported that the actress shelved a family trip to Dubai and made a detour to Kaduna to honour the police invitation.

The magazine further reported that the actress would have been arrested in Abuja, but for the intervention of a senior police officer, who prevailed on his colleagues to allow her submit herself for questioning in Kaduna. 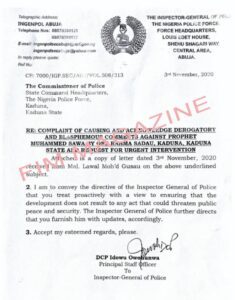 In a letter signed by the Principal Staff Officer to the IGP and addressed to the Kaduna State Police Commissioner, the police boss directed the CP to take proactive measures to prevent breach of peace over the blasphemy.

“I am to convey the directive of the Inspector General of Police that you treat proactively with a view to ensuring that the development does not result to any act that could threaten public peace and security.

“The Inspector General of Police further directs that you furnish him with updates, accordingly,” the letter, signed by DCP Idowu Owohunwa, read in part.

Contacted for comment on the matter, spokesman for the Kaduna State Police Command, Mohammed Jalige, said he was on casual leave outside his station.

He said he would give an update as soon as he is briefed on the matter.