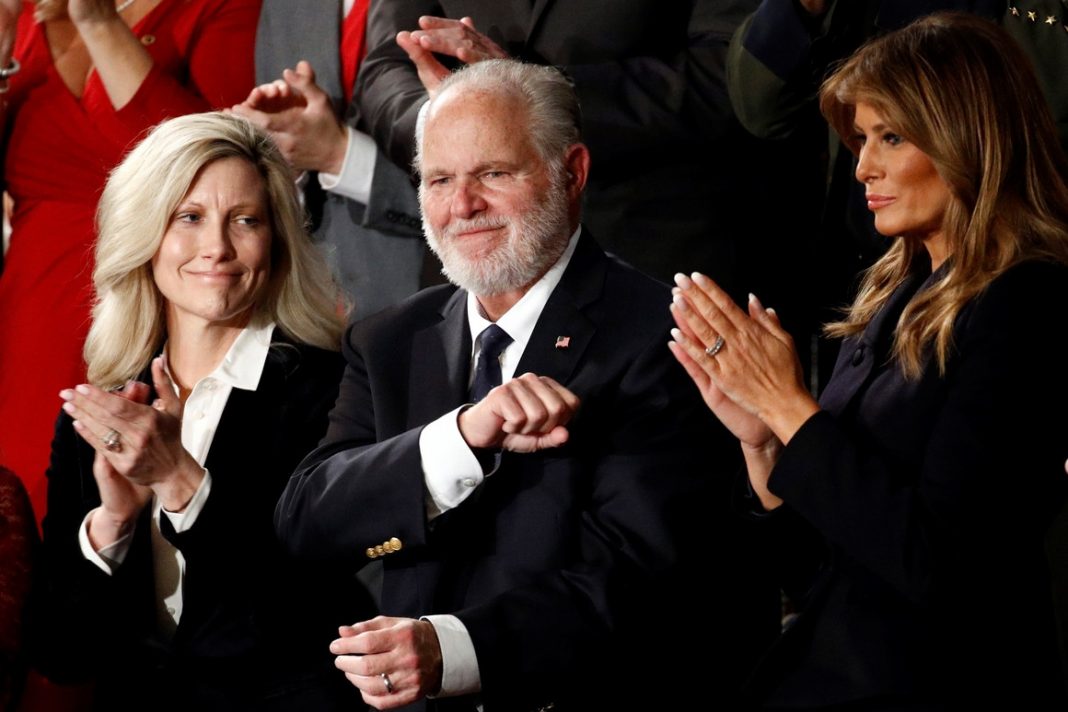 Popular American radio host, Rush Limbaugh, has died of lung cancer at 70. He was the conservative firebrand radio host who was a pillar of right-wing media in the U.S. for more than 30 years. Limbaugh’s wife, Kathryn, announced the news on his radio show.

Rush Limbaugh, a scathing conservative voice who made himself into a powerhouse political figure on talk radio for the past three decades, died on Wednesday.

Kathryn Rogers, the longtime radio host’s wife, announced her husband’s death at the beginning of his show on Wednesday. The cause of death was complications from lung cancer, she said.

Citynews Nigeria learnt that Limbaugh disclosed the severity of his illness to listeners of his syndicated “The Rush Limbaugh Show” in February 2020 when he took several days off to receive treatment. That same month he was awarded the Medal of Freedom, the nation’s highest civilian honour, by President Donald Trump.

Limbaugh wielded enormous influence in politics. He was beloved by conservatives and reviled by liberals. He contributed to the coarsening of public discourse by referring to prominent women as “femi-Nazis” and by belittling those who disagreed with him. During the 2008 presidential campaign, Limbaugh repeatedly referred to Barack Obama as the “affirmative-action candidate.”

He was one of the most popular personalities on radio and one of the most well paid. In 2008, he signed an eight-year deal with Premiere Networks valued at $400 million. His audience at his peak was estimated at about 25 million a week.

Limbaugh was born Jan. 12, 1951, in Cape Girardeau, Mo., to a prominent family. Limbaugh reportedly told his father, an attorney, that he wanted to be radio host at the age of 8. In high school, he worked as a disc jockey for a local radio station owned by his father.

He attended Southern Missouri State University but left after a year to try his hand at radio. He worked at ABC-owned radio station KQV in Pittsburgh. He later moved to Kansas City to join the Royals baseball team as director of group ticket sales, and later advanced to director of sales and special events, Variety.com reports.

In 1983, Limbaugh was back in radio as a commentator on Kansas City’s KMBZ. He moved to Sacramento, Calif., the following year and landed a daytime talk show on KFBK. The show’s ratings took off, and Limbaugh began getting national attention. He moved to New York and signed his first syndication deal with ABC Radio Networks in 1988.

Limbaugh was inducted into the Radio Hall of Fame in 1993. He penned a number of bestselling books including 1992’s “The Way Things Ought to Be” and 1993’s “See, I Told You So” and the children’s book series “The Adventures of Rush Revere.”

Limbaugh was inducted into the National Association of Broadcasters’ Hall of Fame in 1998.

Limbaugh was married four times. His survivors include his wife, Kathryn.

US 2020:Kanye West fails to make November ballot in Missouri