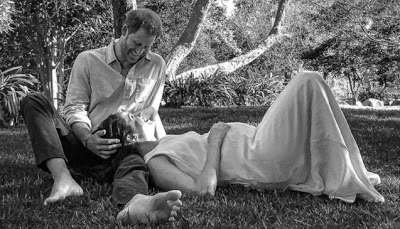 Prince Harry and Meghan Markle are expecting second baby , a spokesperson for the couple has confirmed.

The Duke and Duchess of Sussex, who are currently residing in California, are preparing to welcome a brother or sister for their son Archie, who will be two in May, later this year.

A spokesperson for Meghan and Harry said: ‘We can confirm that Archie is going to be a big brother. The Duke and Duchess of Sussex are overjoyed to be expecting their second child.’

The couple shared their announcement – aptly on Valentine’s Day – by posting a black and white image of Harry resting his hand on Meghan’s head as she lay in his lap underneath a tree.

‘The photograph of the Duke and Duchess was was taken by the couple’s longtime friend Misan Harriman. What wonderful news for the Sussexes!!’ their spokesperson added.

If born in the U.S., the baby will be entitled to U.S. citizenship as an automatic right.

The news comes just months after Meghan, 39, revealed that she lost her second child to a miscarriage in an article for the New York Times.

It also comes on the 37th anniversary of when Harry’s mother, Princess Diana, announced that she was pregnant with him on Valentine’s Day in 1984.

The sex of the couple’s second baby, as well as the due date, remain unclear.

US President, Joe Biden In Fresh Trouble As 120 Retired Military Officers Pass Vote Of No Confidence on His Mental Health

Joshua To Fury, “I’m just ready to fight, I want that belt

Fact about Covid-19: Coronavirus can also linger in the eyes for weeks – scientists