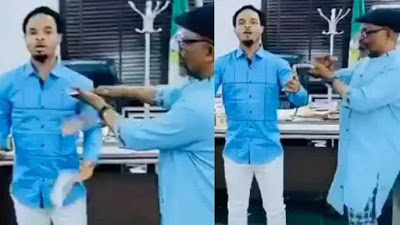 Governor Okezie Ikpeazu of Abia has recalled his Chief of Staff, Dr. Anthony Agbazuere, who has been on suspension since December 6, 2020.

CityNews Nigeria recalls that Agbazuere was suspended after he was captured, right in his office, plastering Naira notes on visiting Prophet Chukwuemeke Odumeje.

He also noted that Ikpeazu has approved the dissolution of the State Executive Council with immediate effect.

Although some individuals of the just-dissolved state executive council were not affected by the dissolution directive.

He said: “The Governor has directed that the previous announcement exempts the Attorney General and Commissioner for Justice, Mr. Uche Ihediwa, the Commissioner for Information, Chief John Okiyi-Kalu, and the Commissioner for Health, Dr. Joe Osuji. They are to continue performing the duties of their offices along with the Secretary to State Government, Mr Chris Ezem.”

The dissolved state executive council was inaugurated on October 16, 2019.

Community Where Donald Trump Finally Moved To About To ”Evict” Him