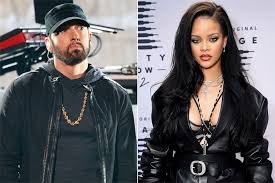 Eminem has apologised to Rihanna after backing Chris Brown’s actions in 2009 assault against the pop star.

Eminem and Rihanna, 32, have been longtime collaborators through the years, even jointly landing the No. 1 spot on the Billboard rap singles chart in 2010 for their smash hit, “Love the Way You Lie.” The dynamic duo are also one-time tour mates, after successfully completing their 2014 Monster tour.

But in 2019, a previously unreleased verse by Eminem was leaked, in which he was heard saying, “Of course I side with Chris Brown / I’d beat a bitch down too,” Entertainment Weekly reports. (Brown pleaded guilty to felony assault and was sentenced to five years probation and community service following the 2009 altercation with then-girlfriend Rihanna.)

Eminem’s sentiments were shocking to many fans, as the pair had previously teamed up on several incredibly popular music projects and were considered friends. At the time, Eminem’s rep Dennis Dennehy said in a statement, per EW, “After Eminem recorded it, he scrapped it and rewrote it.”

This time around, Eminem acknowledges his past behavior on “Zeus.” He rhymes about the controversial line: “Long as I re-promise to be honest / And wholeheartedly, [I give to] apologies, Rihanna / For that song that leaked / I’m sorry, Ri / It wasn’t meant to cause you grief / Regardless, it was wrong of me.”

Biden Urged To Renounce Sole Control Of US Nuclear Weapons