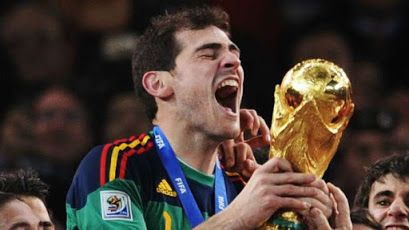 The World Cup-winning goalkeeper has decided to hang up his gloves after suffering a health scare and exploring options away from the field.
Iker Casillas has officially announced his retirement at the end of a 22-year playing career, with the legendary Real Madrid goalkeeper hanging up his gloves at the age of 39.
The World Cup winner has not taken in a competitive appearance since suffering a serious health scare in May 2019.
He recovered from a heart attack to rejoin the ranks at Porto and was named in their squad for the 2019-20 campaign.
Casillas has, however, now taken the decision to hang up his gloves as he seeks to move in a different direction away from the field.
He posted on social media: “The most important thing is the path you travel and the people who accompany you, not the destination that it takes you.
“I think I can say, without hesitation, that this has been the right path and the dream destination. Thanks.”

READ ALSO:   EPL gets green light to scrap use of VAR

Breaking: Only Golfer’s Permission Can Reveal Cause Of Tiger Woods Accident

US Lawmaker-Elect Dies Of COVID-19, Days Before Swearing-In