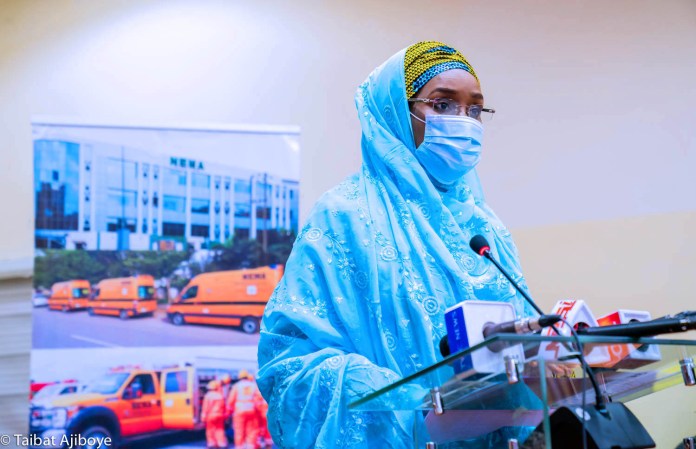 Members of the House of Representatives Committee on Internally Displaced clashed openly on Tuesday over alleged harassment of the Minister of Humanitarian Affairs, Disaster Management and Social Development, Hajia Sadiya Farouk, while she was being grilled on the distribution of Covid-19 palliatives.

A member of the committee, Fatuhu Mohammed (APC/Katsina) accused his colleagues of unnecessarily “harassing” Farouk over how the distribution of palliatives as ordered by President Buhari, was done when it was clear that the minister had lived up to expectations in the discharge of her duties.

A visibly angry Mohammed said, “This minister has done very well. This is not the right way to treat her. We all saw what happened during the #EndSARS protest; how they looted palliatives from various warehouses across the country. Why the harassment? I can’t allow this to happen to her.”

The Katsina lawmaker, who refused to withdraw the statement, walked out of the venue angrily, while the minister watched as the drama played out.

Chairman of the committee, Mohammed Jega (APC/Kebbi), stated that it was the responsibility of the lawmakers to know the details of how the 2020 budget was implemented.

Jega, however, declined a motion moved by another member, Mr Awaji-Inombek Abiante (PDP/Rivers) for the committee to suspend consideration of the ministry’s 2021 budget proposal pending when details of the 2020 budgetary expenditure would be made available.

In her presentation, Farouk said about N321.4m or 58.29 per cent of total allocation to COVID-19 intervention was utilised.

She also stated that the palliatives were shared to the states, with the expectation that the items would be benefitted by the target beneficiaries,who are the poor and vulnerable.

The minister noted that apart from the budgeted sum, the food and non-food items received from the Nigeria Customs Service during the lockdown were distributed to targeted beneficiaries cutting across a wide range of vulnerable groups, including Internally Displaced Persons in the 36 states of the federation and the Federal Capital Territory.

Farouk, however, insisted that all 36 state governors, including the Minister of FCT, received COVID-19 palliatives except Rivers State that rejected its own share.