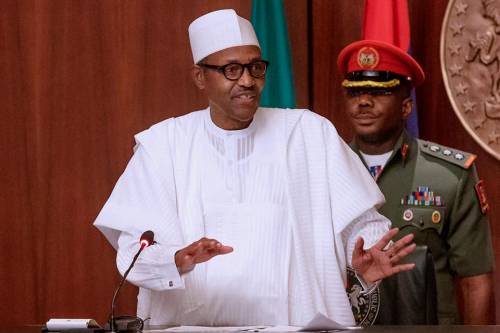 The presidency has said the federal government hands will not be forced on the issue of restructuring because of secession threats.

Citynews Nigeria Garba Shehu, presidential spokesman made this known in a statement on Friday.

Shehu said unpatriotic and Inciting remarks in some quarters would not help in advancing the cause of those pushing for restructuring of Nigeria as president Muhammadu Buhari can’t be intimidate by such rhetorics of break up.

He said the president will not be forced to take decisions that will endanger the lives of Nigerians.

Shehu, however, noted that the government is willing to work with stakeholders and lawmakers in addressing the structural issues and impediment obstructing the growth of the country.

“The Presidency responds to the recurring threats to the corporate existence of the country with factions giving specific timelines for the President to do one thing or another or else, in their language, ‘the nation will break up’,” the statement read.

“This is to warn that such unpatriotic outbursts are both unhelpful and unwarranted as this government will not succumb to threats and take any decision out of pressure at a time when the nation’s full attention is needed to deal with the security challenges facing it at a time of the Covid-19 health crisis.

“Repeat: this administration will not take any decision against the interests of 200 million Nigerians, who are the President’s first responsibility under the constitution, out of fear or threats especially in this hour of a health crisis.

“The President as an elected leader under this constitution will continue to work with patriotic Nigerians, through and in line with the Parliamentary processes to finding solutions to structural and other impediments to the growth and wellbeing of the nation and its people.”

There have been strident calls for restructuring of the country to save it from collapsing.

Watch Jerry Rawlings Speak On Hospital Bed Before His Death(VIDEO)

Rivers: Father in police net for impregnating his 16-year-old daughter after raping her for five...

Indabosky: See What Prophet Odumeje Said In His Year 2021 Prophecies(VIDEO)