Home Politics What Austerity! See How Aisha Buhari Made ₦155M From Her Book Launch 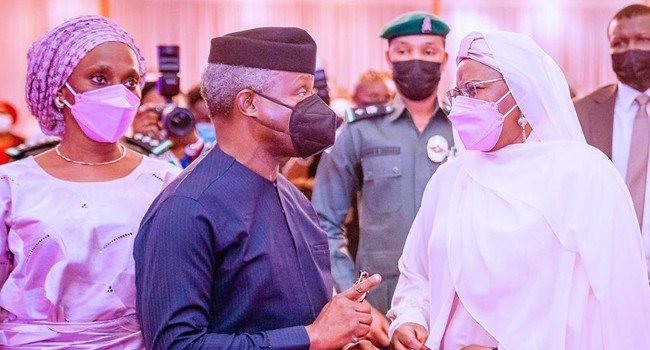 Aisha Buhari made a total N115 at her book launch yesterday.

CityNews Nigeria learnt that Wife of the President, Aisha Buhari, on Thursday raked in N95 million at the launch of her book  , titled, “Aisha Buhari, Being Different”.

The book written by Senior Special Assistant to the President on Administration and Women Affairs, Office of the First Lady, Dr Hajo Sani, was launched at the State House Banquet Hall, Abuja.

CityNews also gathered that other people pledged around N60M which they promised to redeem as soon as possible.

The NGF Chairman and Governor of Ekiti State, Kayode Fayemi and Deputy Senate President, Ovie Omo-Agege promised to send an undsclosed amount of money to purchase theirs on behalf of governors and senators respectively.

Sen. Daisy Danjuma among others also followed the footsteps of the governors and senators.
The event was jointly organised by the Office of the First Lady of Nigeria and the Women and National Development (WAND)

US: Gay presidential candidate, Pete Buttigieg replies boy who came to his rally asking for...