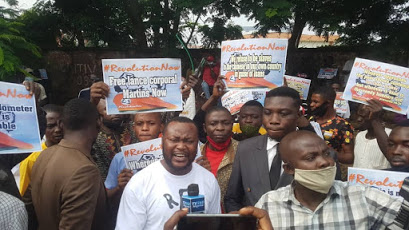 Several peaceful protesters under the umbrella of #RevolutionNow were molested and arrested Wednesday by security agents from the State Security Service (SSS), the Nigerian Army, and the Nigeria Police.
The protesters were demanding good governance, proper infrastructural development, end to extrajudicial killings, the sack of service chiefs over the poor security situation in the country, and low employment opportunities,  among other agitations.
The protests were in states such as Lagos, Ogun, Osun, Ondo, Niger, and the Federal Capital Territory (FCT) to mark the first anniversary of the #RevolutionNow Movement.
Activists said over 100 protesters have been arrested. According to Deji Adeyanju, a right activist, about 60 protesters were arrested in Abuja around the Unity Fountain and whisked away in police trucks.
Mr Adeyanju, who also took part in the protest, shared on Twitter pictures of protesters who were ordered to lie face down by armed security agents.
“Security agents harassing peaceful protesters but they run or cry when they see Boko Haram or bandits,” he said. “We are currently witnessing a joint madness by the military, police and other security agencies as over 60 of our comrades have been arrested over peaceful #RevolutionNow protest. The Abacha days are here once again..
In Lagos, at least, 10 persons, including Agba Jalingo, a journalist, were arrested by the police, witnesses said.
The protesters were arrested at Ikeja Along during their second convergence for the protest on Wednesday.
Mr Jalingo and the others arrested were sensitising traders and passersby on the need to rise and fight bad governance in Nigeria.

READ ALSO:   Sinach No 1 On Billboard USA For Christian Song