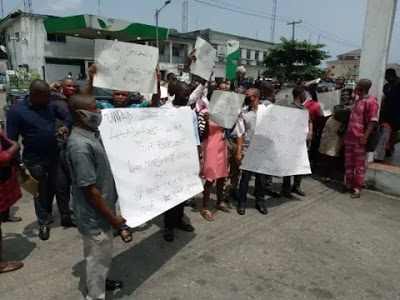 Over 110 staff members of Ahoada-West Local Government Area council of Rivers State have staged a peaceful protest over non-payment of their one-year salary, begging the state governor, Chief Nyesom Wike, and the state house of assembly to prevail on the LG chairman, Mr. Hope Ikiriko, to pay their 13 months’ salary arrears.

The protesters, who stormed the State Government House, Port Harcourt and the House of Assembly Complex Thursday, claimed that the LG chairman decided not to pay them their salaries because they were not from Ahoada-West, adding that all the indigenes of the LGA have been vetted out and are receiving their salaries.

Speaking, the leader of the protest, Nwisaenee Dornubari, dismissed the claims that the affected persons were ghost workers, noting that they were all duly employed and posted to the LGA by the government.

Dornubari said: “Before we came for this protest we have utilized all the internal mechanism that civil servants are meant to go through to resolve this matter, but it was futile.

“The Chairman of the LGA, Hon Hope Ikiriko has refused to pay us for the past 13 months now. When he came he said he wanted personnel audit and all of us went through four stages of the process. I don’t know the criteria he has used to deny us our salary. I don’t know the reason he is denying us our statutory right.

“We are not ghost workers we are not retirees as he is claiming. We are duly employed and serving. The highest person among us 40 years. We are begging on the governor of the state the Speaker to use his good office to prevail on Hope Ikiriko to pay us our salary.”

Also, Peace Joseph, a level eight staff of the council accused the chairman of the LGA of being selective and tribal, noting that he (Ikiriko) has refused to pay them because they were not from the LGA

Joseph said: “For 13 months now we have not been paid. Our salaries are withheld by the council Chairman, Hon. Hope Ikiriko. He said we should go back to our local government areas and work that we are not supposed to work in Ahoada West.

“We are crying for our right. We are suffering and going through untold hardship because of one man that refused to give us our right. He is selective. We were 350 staff that was affected, the people from that LGA went to him and he removed our name from and now we are 110 people working in the LGA that are affected.”

However, attempt to reach the LG chairman or the press secretary at press time for response proved abortive.

See How Much Ebonyi Woman’s Trying To Sell Her Baby Before She Was Nabbed By...

Court Jails House of Reps Member For Lying Under Oath