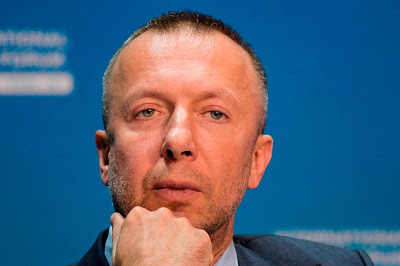 A Russian billionaire coal baron has been found dead with a pistol close to his body in a ‘suspected suicide’.

Dmitry Bosov,  52, was discovered by his wife Katerina locked in the private gym of his mansion in the Moscow suburbs, say reports.

Their jet-setting daughter Bella Alexa, aged two, is a social media star with 354,000 followers whose biography describes her as “Rich Kid of Beverly Hills”.

Pictures show the globe-trotting toddler in designer clothes playing in front of the family’s private jet and travelling to France and Italy.
A Glock pistol was found near his body at his mansion in the village of Usovo, near Moscow, where he was on lockdown.

The Russian Investigative Committee has opened an inquiry into his death, reported Interfax.

Investigators were interviewing his relatives and the “reasons of the incident are being established”.

No suicide note was found.

Bosov – worth $1.1 billion – headed Alltek group, which controls the coal producers Siberian Anthracite,  where his widow was a senior executive, and VostokUgol.

Siberian Anthracite said father of five Bosov “died tragically”, calling him a “distinguished businessman” and a “bold and decisive innovator”.