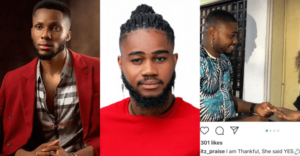 The thing about being on a reality TV show is that you allow the general public into your personal life. The thing about being on not only a reality show, but a reality show where you are being recorded twenty four seven and being watched by millions and millions of people, a show like Big Brother Nigeria, is that every single sentence anybody in the house says, we on the outside can follow it up and follow it up TIMES 10.

We can get to the root of any story said, we can dig up old pictures, we can go looking for receipts. And in the case of Praise and his wife, that is what happened.

In the Big Brother house, a little bit of commotion was caused and the story went viral when BBN housemate, Brighto told other BBN housemate, Kiddwaya that one of the housemates in the house, Praise who has openly disclosed that he is married and has a son, might not have married his current wife for the right reasons.

There is always drama in the Big Brother house. In today’s drama, Brighto started feeling a kind of way about Praise and was upset at the fellow housemate for his treatment towards him.

So, in anger and to express his feelings, the BBN housemate went to talk to fellow housemate, Kiddwaya and told Kiddwaya:

From today onward ehn, I’ll be talking to that Praise in a kind of way. He likes to talk me anyhow, do you understand? But he forgets that he’s too emotional and things can get to him easily. From today, I’ll be telling him things that will get to him.

He acts anyhow, he misbehaves. What I’m going to do now is whenever he says anything, I’ll tackle him. I know his weakpoint. He’s too emotional. I know the kind of thing that will get him so angry, so pissed that he can even cry. I swear to God. You know the woman he brags about, “my son, my wife,” his wife is close to 60 years old. 60-something. I’m telling you something. I swear to God.

He told me. We had a conversation then, he now said it: that his wife is way way older than him.

After Nigerians heard a bombshell like this, of course they couldn’t let it go. Immediately, Nigerians went digging and not even up to 24 hours later, they have now come back with pictures and receipts of Praise’s older wife.

While she does look a lot older from the pictures, I don’t know if she looks 60-something to me. But then again, what does 60-something look like these days? Angela Bassett is 62 years old after all.

Either way, below are the three pictures of Praise’s wife that people dug up. Does she looks 60 to you? And do you think there’s anything wrong if Praise married a woman that is way wayyy older than him in this way?

I’d like to hear your thoughts. But for now, here are the pictures.