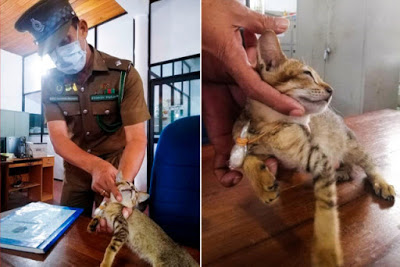 A cat that was detained at Sri Lanka’s main prison while allegedly trying to smuggle drugs and cell phone SIM cards has escaped, according to media reports on Monday.

The feline was detected by jail intelligence officials on Saturday at the high-security Welikada Prison, a police official said.
The official said nearly two grams of heroin, two SIM cards and a memory chip were found in a small plastic bag tied around the cat’s neck.
While there is no stipulation for animal arrest under Sri Lankan law, police were hoping the cat could lead them to the smugglers’ den, the media reports suggest. But it escaped on Sunday from a prison room where it was kept. The cat reportedly scampered out of its holding room and escaped through a fence when prison guards came in to feed it.
There was no immediate comment from prison authorities.
The prison had reported an increase in incidents of people throwing small packets of drugs, cell phones and phone chargers over the walls in recent weeks.
Sri Lanka is battling a major drug problem with some anti-narcotics detectives also implicated in selling confiscated drugs.
Police last week seized an eagle allegedly used by drug traffickers to distribute narcotics in a suburb of Colombo.

READ ALSO:   Group cautions on use of pesticides as preservatives, suicide

Coronavirus: 80 million Africans could be pushed into extreme poverty if action is not taken...

US Decides: Kanye West will not appear on the 2020 presidential ballot in South Carolina