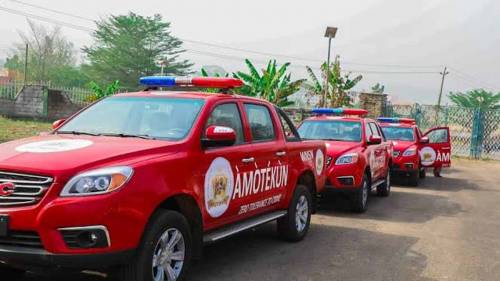 The state governments in the south-west say Mohammed Adamu, inspector-general of police, should not be allowed to determine the structure of Amotekun.

The Development Agenda for Western Nigeria (DAWN), a commission set up by the south-west governments, said this in reaction to comments credited to Garba Shehu, a presidential spokesman.

In an interview on Sunrise Daily, a Channels Television programme, on Tuesday, Shehu was quoted to have said the structure of the security outfit would be determined by the IGP.Amotekun was established by the govts in the south-west in response to rising insecurity in the region.

In response to Shehu’s comments, Seye Oyeleye, DAWN director-general, said Amotekun would only be guided by the laws passed in the south-west states. Oyelele said in a federal system, states are allowed to have their security outfits as long as they are backed up by laws.

“The houses of assembly in the six states in the south-west have passed laws to guide the operations of Amotekun in their states. I don’t know what he (Shehu) meant except he is saying that the order of the inspector-general of police supersedes the states’ laws,” PUNCH quoted the director-general as saying.

“Amotekun is guided by the states’ laws. The setting up of community policing should not in any way disturb the operations of Amotekun. In any federal system, there are multi-layers of policing and the more the merrier; Nigeria needs policing at different layers.

“The operations of Amotekun are guided by the laws duly passed by the houses of assembly in the six states in the region and the bills were assented to by the governors.

“When I read what was credited to Garba Shehu, I found it strange. The Ondo state Amotekun is fully operational. Even Garba Shehu contradicted himself while saying this. He said, on the one hand, the IG would supervise Amotekun, and on the other hand, he said Amotekun was guided by individual state laws.”Oyeleye said community policing cannot be controlled by a single person in Abuja.