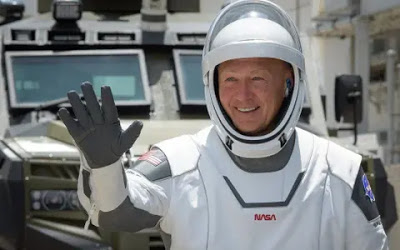 Two US astronauts have undocked from the International Space Station (ISS) and were expected to splash down in the Gulf of Mexico on Sunday afternoon, ending a historic mission testing human spaceflight operations for SpaceX hardware.

NASA astronauts Bob Behnken and Doug Hurley, captaining the SpaceX Crew Dragon spacecraft, undocked at 7:35 pm (2335 GMT) on Saturday.
Their trip back to Earth is expected to take about 19 hours and they were expected to “splashdown” off the coast of Florida at 2:41 pm.
In May, the two astronauts became the first people to dock a privately-built spacecraft on the ISS.

It was the first launch from US territory in nearly a decade and the first time a private firm, rather than a government space agency, has sent astronauts into orbit.
The purpose of the trip was to complete the validation of human spaceflight operations for SpaceX hardware, which will pave the way for private companies to ferry astronauts to the ISS, ushering in a new era of commercial spaceflight.

Is she having a laugh? I will sleep in your bed tonight – Wathoni tells...