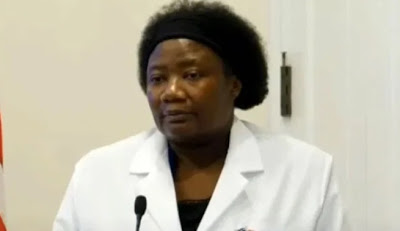 Stella Immanuel, the doctor who claimed hydroxychloroquine, zinc, and Zithromax, were effective cures for COVID-19, has demanded apology from US President, Joe Biden and the media which called her crazy.

Immanuel, a Donald Trump loyalist, made the claim on July 28, 2020, at the premises of the US Supreme Court.

Immanuel, a Cameroonian who schooled in Nigeria and is based in the US, was among a group testifying that the drug is efficacious.

She claimed she had treated 350 patients in her clinic and called all doubters scientific fraud. The move was to lobby the Congress to buy Trump’s advocacy for hydroxychloroquine.

On Wednesday, Immanuel asked Biden and others to apologise to her as new studies have revealed that Hydroxychloroquine actually works in treatment of COVID-19.

However, she gave no links to authenticate these new studies.

“I demand an apology. When we said Hydroxychloroquine works, we were ridiculed. Now studies are coming out saying it works. What about hundreds of thousands that have died and are still dying?

“I demand an apology from the media, CNN, CNBC, New York Times and all their likes, all those people, that called me crazy, from Hollywood, I mean from people that sat down making videos and calling me crazy, when I said Hydroxychloroquine works and they should not allow people to die.

READ ALSO:   There Are Yorubas And Igbos Amongst Bandits - Gov. Bala Mohammed

“I am talking about FDA, CDC and others. I am talking about all of you, my colleagues, the ones that called me names and threatened to report me to the board and all that because I said Hydroxychloroquine works.

“Now you have all these studies that said it works. What about the 500,000 people plus that have died, who is going to be responsible for them?

“Even Joe Biden calls me crazy, I demand an apology from every single one of you because when I said the truth, none of you listened. You laughed at us, you ridiculed us and you allowed people to die. You are evil, this is evil, somebody need to be held accountable for this,” she said in a video on twitter.

I demand an apology. When we said Hydroxychloroquine works we were ridiculed. Now studies are coming out saying it works. What about hundreds of thousands that have died and are still dying. Take care of your family. Visit https://t.co/jTDgb5Et5p for prevention and treatment. pic.twitter.com/uaWmHx5dXl

Breaking: Manchester City Through To Semi-Finals