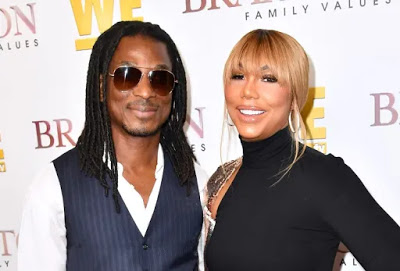 Earlier in July, Adefeso found Tamar almost lifeless at their residence. He immediately rushed her to a hospital.
The 43-year-old star had consumed an undisclosed amount of prescription pills and also took lots of alcohol.
Tamar Braxton has since recovered and she has taken to Instagram to publicly show gratitude to her man.
She wrote: ”I came here just to say this and then I’m logging off… if you have ever been in recovery or treatment you know that you reflect on a lot of things…so, I couldn’t let another day, another second go by without PUBLICLY Thanking my Love @david.adefeso for saving my life… I’m so grateful.
I was in our home lifeless & I’m sure finding me the way that you did couldn’t have been easy.
But know that people coming at you saying all crazy stuff, isn’t easy for me. people have called you every name in the book, to deflect from what’s really been going on. and you know that through this entire time, you have held my hand, heard my cries, held me when I have been weak.