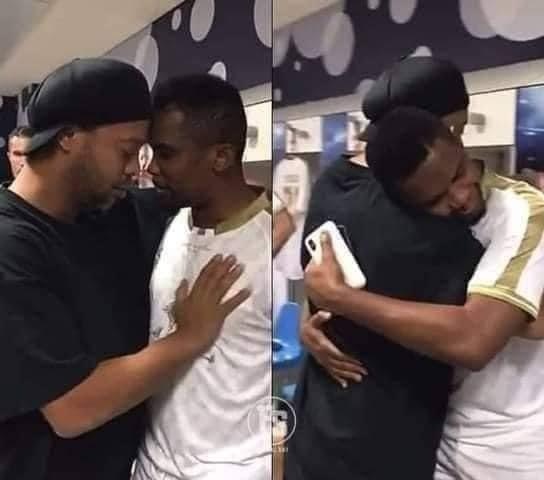 I learnt great lesson some years ago about friendship, or what people define as “A Friend”. I visited an elderly mentor in Orlando at the University of Central Florida, after exchanging some long banters he took me home to his family. We spent long hours talking about everything, Writing, Family, Christianity, Nigeria and then Friendship. He said to me “time and season will show who your true friends are, I am nice to acquaintances, colleagues, neighbours, church members etc, but I allow time and circumstances to define who are my true friends”. Those words stuck with me till date and it helped me to gradually define every relationship.

This story was shared with me by a retired Nigeria’s international footballer. There are great didactic insights.

When Ronaldino was arrested alongside his brother Roberto Assis over fake Passport issue in Paraguay and detained at Agrupacion Especializida Maximum security prison for 32 days, only two former footballers visited him ; that is Samuel E’to’o of Cameroon and Paraguay International Nelson Cuevas.Messi :Koeman decides on signing Aubameyang from Arsenal

E’to’o called him consistently to know how he was faring and gave him hope that things would be okay.

After pleading guilty to the charges, Ronaldinho was fined $90,000, while Assis was fined $110,000. (Unconfirmed report had it, because I have not read this, I saw his heartfelt Birthday message to him as seen on URL here https://www.goal.com/en-za/news/watch-etoos-emotional-birthday-message-to-ronaldinho-in/144ua3vffi7ki1g8mkeo45vvem

), It was reported that when he informed Eto’o, Eto’o responded “Don’t worry Bro, I will take care of everything ” and he wired the money so that Ronaldino could be released.

Of all prominent friends Ronaldino made at the peak of his career, only this Cameroonian that was once called different racist names by the Spanish and Italian fans was there for him.

The moral of the story is you must know your true friends at the time of need, be careful who you call “friends”. Friendship is tested by the ability to stand by each other at the time of dire need and support. True friends always stay!

The second picture (below)was a guy paralysed but needed to urgently wed his heartthrob because of the Doctors’ prognosis, friends gathered around him at the wedding and ensured he took the marriage vows. True friends stand with us, they do not bad-mouth us, they keep our secrets and celebrate our successes and show true love even when it seemed impossible. 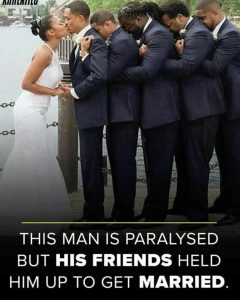