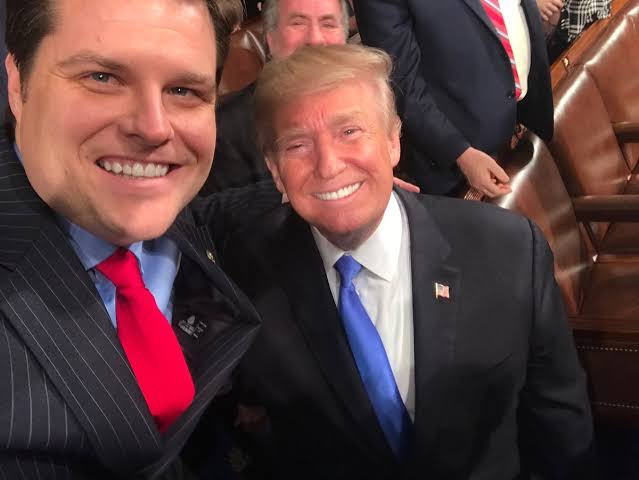 US Republican lawmaker and outspoken Trump ally, Matt Gaetz is under investigation by the Department of Justice for a sexual relationship he allegedly had with a 17-year-old girl, the New York Times and Axios have reported.

US lawmaker, Matt Gaetz claims he

The investigation was started in the final months of the Trump administration under then-Attorney General William Barr.

The Justice Department is looking into whether Gaetz, a staunch die-hard Trumpian from Florida, violated federal sex trafficking laws by paying for a 17 year old young woman to travel with him outside of Florida.

Earlier on Tuesday March 30, Axios reported that Gaetz, 38, had told associates he was considering not seeking reelection so that he could pursue a job opportunity with the staunchly conservative network Newsmax.

Responding to the Times Report, Gaetz said that while his lawyers have been in contact with the Justice Department, he had been told he is not the target of an investigation.

“I only know that it has to do with women,” Gaetz told the paper.

“I have a suspicion that someone is trying to recategorize my generosity to ex-girlfriends as something more untoward.”

In a telephone interview Tuesday evening with Axios reporter Johnathan Swan, Gaetz clarified that he was innocent.

“The allegations against me are as searing as they are false,” Gaetz said.

“I believe that there are people at the Department of Justice who are trying to criminalize my sexual conduct, you know when I was a single guy.”

“I have definitely, in my single days, provided for women I’ve dated,” Gaetz added.

“You know, I’ve paid for flights, for hotel rooms. I’ve been, you know, generous as a partner. I think someone is trying to make that look criminal when it is not.”

As the story continued pick up steam on Tuesday night, March 30, Gaetz tweeted that he and his family have been the target of an extortion plot under investigation by the FBI and that the story of his relationship with a minor was intended to “thwart that investigation.”

”Over the past several weeks my family and I have been victims of an organized criminal extortion involving a former DOJ official seeking $25 million while threatening to smear my name. We have been cooperating with federal authorities in this matter…

”..and my father has even been wearing a wire at the FBI’s direction to catch these criminals. The planted leak to the FBI tonight was intended to thwart that investigation. No part of the allegations against me are true, and the people pushing these lies are targets…

”..of the ongoing extortion investigation. I demand the DOJ immediately release the tapes, made at their direction, which implicate their former colleague in crimes against me based on false allegations.” 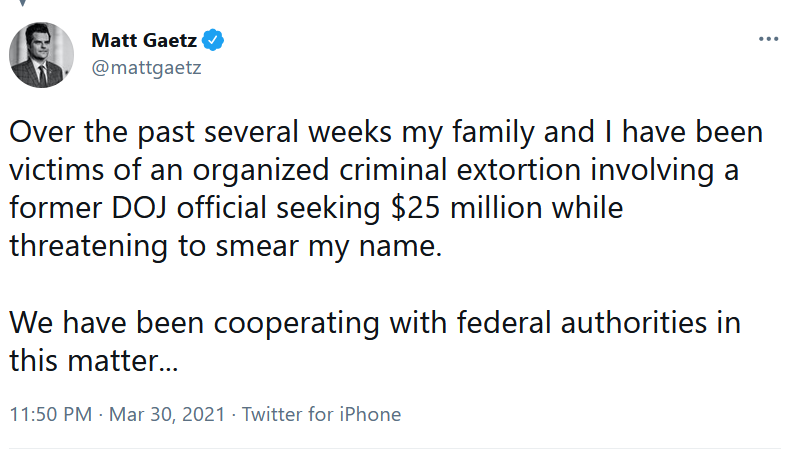