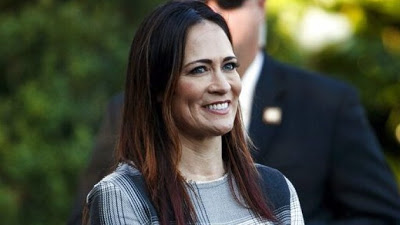 She stepped down as White House press secretary today to return to the East Wing as chief of staff to first lady Melania Trump, according to a White House statement.

Grisham spent less than a year in the post without ever holding a news briefing.

Her predecessor, Sarah Sanders, scrapped the regular briefings that had been customary to the job throughout Republican and Democratic presidential administrations dating back to Herbert Hoover’s, according to historian Martha Kumar.

Grisham is expected to begin her role with the first lady immediately, according to a statement from Melania Trump that announced the change.

US2020: Sarah McBride Becomes First Transgender To Become Senator In US

Lagosians Should Expect ‘O To Ge’ Revolution In 2023 – Bode George

Groom threatens to call off wedding after bride-to-be told him he can’t have a female...