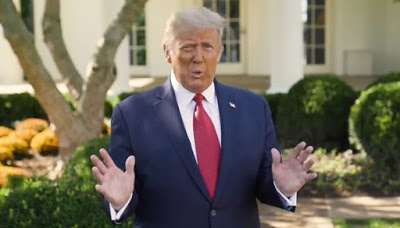 Donald Trump is due to host a public event at the White House later – his first since being ill with coronavirus.

The president, who says he is no longer taking medicines against Covid-19, will give a speech from the White House balcony to several hundred supporters gathered on the South Lawn below.

It is just over a week since Mr Trump announced he had tested positive for coronavirus.

He said on Friday he was awaiting a fresh test result.

Saturday’s White House gathering is officially a presidential rather than campaign event.

On the official schedule it is described as: “The president delivers remarks at a peaceful protest for law and order.”

READ ALSO:   JSS 3 students in Kaduna to resume next week

Mr Trump has been criticised for using the White House for political events, such as when he accepted his party’s renomination for president from the South Lawn back in August.

The president says he is planning to attend a “big rally” in Florida on Monday.

Florida is a battleground state in next month’s presidential election.

Polling suggests Democratic candidate Joe Biden has a single-digit lead over Mr Trump and an ABC News/Ipsos poll found that just 35% of Americans approved of how Mr Trump has handled the coronavirus crisis.

However US presidential elections are in practice determined in key states where both candidates stand a chance of winning, rather than by the total number of votes won, as Hillary Clinton found to her cost in 2016.

Mr Trump told Fox News that he was feeling “really, really strong” and was no longer on medication, having had his “final doses of just about everything”.

On Thursday the president’s doctor Sean Conley said that it would be safe for him to return to public engagements on Saturday [10 October] as that would mark “day 10” since his diagnosis on Thursday 1 October.

Spotify To Launch In Nigeria