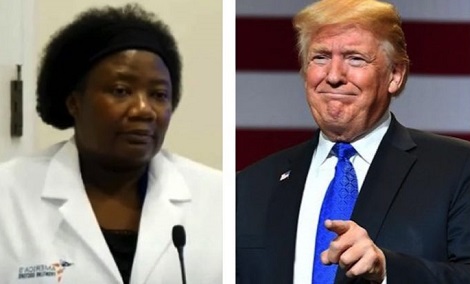 Texas based medical doctor and evangelical Christian, Stella Immanuel is not ready to accept the reality of emergence of Joe Biden as the 46th President of the United States.

Trump has refused to concede after Biden, secured the required number of electoral college votes to win the presidential race.

In a defiant statement shortly after Biden was projected winner, Trump said the election was “far from over”, and criticised Biden for “rushing to falsely pose as the winner”.

Speaking in the same vein, Dr Immanuel, who was shown on video praying for Trump as the counting of votes for last Tuesday’s election indicated that the Democratic candidate had taken lead over the sitting President said on Saturday in a post on his Facebook page that the battle for the presidency is not over.

“IT IS NOT OVER! THE STONE IS ABOUT TO DESCEND. THEY MAY MINGLE WITH US BUT THERE IS ABOUT TO BE A CRUSHING. KEEP PRAYING,” Immanuel said in a post in which she quoted Daniel 2:43-45.

IT IS NOT OVER! THE STONE IS ABOUT TO DECEND. THEY MAY MINGLE WITH US BUT THERE IS ABOUT TO BE A CRUSHING. KEEP PRAYING.

And whereas thou sawest iron mixed with miry clay, they shall mingle themselves with the seed of men: but they shall not cleave one to another, even as iron is not mixed with clay. And in the days of these kings shall the God of heaven set up a kingdom, which shall never be destroyed: and the kingdom shall not be left to other people, but it shall break in pieces and consume all these kingdoms, and it shall stand for ever. Forasmuch as thou sawest that the stone was cut out of the mountain without hands, and that it brake in pieces the iron, the brass, the clay, the silver, and the gold; the great God hath made known to the king what shall come to pass hereafter: and the dream is certain, and the interpretation thereof sure. Daniel 2:43-45