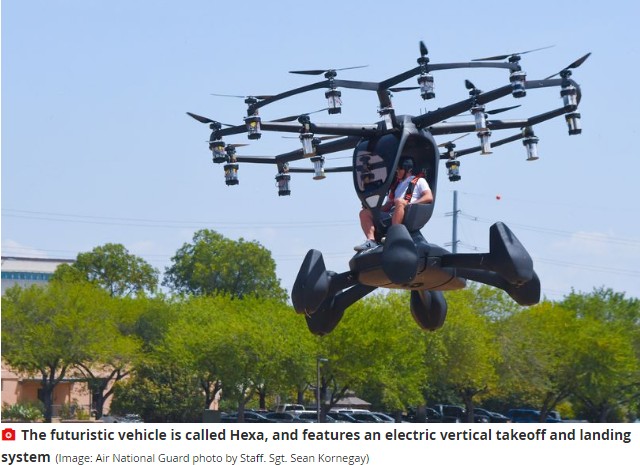 From The Jetsons to Harry Potter, flying cars have been a staple feature of science fiction blockbusters for decades.

Now, flying cars are becoming a reality, with the US Air Force unveiling a futuristic ‘flying car’ this week.

Barbara Barrett, Secretary of the Air Force, said: “The thought of an electric vertical take-off and landing vehicle — a flying car — might seem straight out of a Hollywood movie, but by partnering today with stakeholders across industries and agencies, we can set up the United States for this aerospace phenomenon.”

The futuristic vehicle is called Hexa, and features an electric vertical takeoff and landing system.

It has a central seating pod where the pilot sits, six landing feet and 18 propellors, and could be used to shuttle troops across war zones by 2023.

Hexa is just one of 15 aircrafts vying to partner with the US Air Force.

Col. Nathan Diller, AFWERX director and Agility Prime lead, explained: “This flight today marks the first of many demonstrations and near term flight tests designed to reduce the technical risk and prepare for Agility Prime fielding in 2023.”

The demonstration comes shortly after Vertical Aerospace showcased its flying taxi prototype in London’s Canary Wharf, and Mirror Online was given an exclusive behind-the-scenes tour.

The vehicle, dubbed Seraph, is an electric vertical take-off and landing aircraft that could take to the skies as early as 2023.

Seraph features six arms and 12 rotors, which are each powered by independent motors.

Speaking to Mirror Online, Simon Harper, head of testing at Vertical Aerospace, explained: “They’re completely independent, so if one was to stop working, the other would pick up the load.”