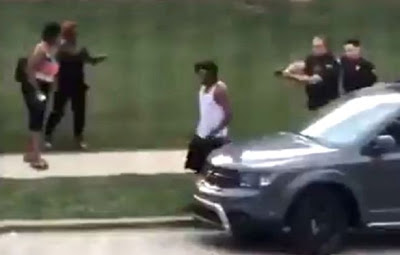 The US policeman who shot a black man seven times in the back sparking a new wave of protests has been identified.

Rusten Sheskey has been named by the Wisconsin Department of Justice as part of its ongoing probe into the incident that left Jacob Blake paralysed.

Blake was gunned down by officers in Kenosha, Wisconsin on Sunday in front of his sons, one of whom had turned eight that day.

Just 18 minutes after the shooting his dad saw a now viral video of the incident in which Blake can be seen walking to his car door pursued by police amid shouts.

As he opens the door bullets fly into his back, prompting him to slump into the vehicle.

At a press conference yesterday, investigators said Blake had a knife in the car he was reaching into when he was shot, and that no other officer opened fire.

Attorney General Josh Kaul said the 29-year-old dad had admitted to investigators that he had a knife in his possession at the time.

But a search of Blake’s vehicle turned up no other weapons, Kaul added.