Home Politics Waawu!The moment Brazilian president says ‘so what?’ in response to over 5000... 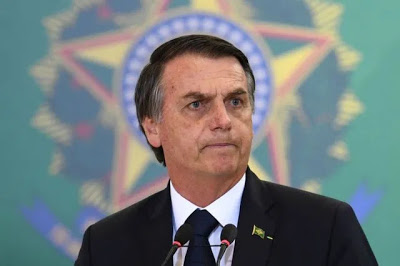 Rarely have two words ignited such a firestorm of controversy. “So what?” said Brazilian President Jair Bolsonaro on Tuesday when a journalist asked him about the fact that more than 5,000 Brazilians had died of the coronavirus.

The far-right leader’s off-the-cuff comment has been sparking anger ever since, with governors, politicians, healthcare professionals and media figures all weighing in to express their outrage at his lack of empathy.

Bolsonaro is no stranger to controversy. But his latest remark sparked such a fury because Brazil is facing a seemingly uncontrollable outbreak of the disease and is still several weeks away from the peak of the pandemic, with a death toll that threatens to surpass even the most dire predictions.

There have been more than 91,000 officially confirmed cases so far but scientists warn the real figure could be 15 to 20 times higher.

With a death toll that has already topped 6,300, the giant South American country is facing as grim a scenario as Italy or the United States.

“So what? I’m sorry. What do you want me to do?” Bolsonaro said on Tuesday when questioned about his country passing the 5,000-death mark, more than China. He joked that even though his middle name is Messias, or Messiah, “I don’t do miracles.”

With his own state on the verge of a public health meltdown, Witzel slammed the president for “being ironic about the deaths” rather than “being a leader at such a moment.”

“Do your job,” he said on Twitter Wednesday, the day when the pro-gun president was training at a target range, far from the woes of Brazil’s 210 million citizens.