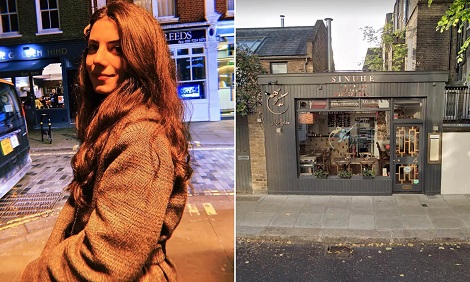 A restaurant waitress got revenge against a chef who slapped her bottom by encouraging her friends to post negative reviews of the establishment online.

University student Farah Istanbouli, who has won a £9,000 payout at tribunal, said she felt ’embarrassed’ and ‘humiliated’ when Hussein Agha smacked her behind while they were dancing in the kitchen.

But after she complained to the owner of Persian eatery Sinuhe, in London’s West End, he threatened her with being blacklisted from getting another job and refused to sack the chef.

The then 19-year-old resigned and told her friends what had happened and they then started to post negative online reviews of the restaurant, despite never having eaten there, the tribunal was told.

She has now won more than £9,000 after the restaurant was found guilty of sexual harassment and victimisation.

The hearing in London was told that Miss Istanbouli had started working part time at Sinuhe in September 2018 while she was studying at the University of London.

In November of that year Mr Agha and another staff member persuaded her to play some traditional wedding music in the restaurant between shifts.

Miss Istanbouli said the two men then began to dance.

‘At first, I was just watching and laughing,’ she told the London tribunal. ‘Then they told me to dance with them. So I walked over to them and just waved my hands back and forth, which is a ‘manly’ way to dance to such music.

‘(They) were getting into it and I felt like I was finally part of the team,’ she said, explaining that she then let out a traditional Arabic wedding call known as a ‘zaghloot’.

She said: ‘Mr Agha then shooshed me loudly and slapped my lower back and then he slapped my butt hard which hurt and made a really loud sound.

‘I became really embarrassed and did not know how to react. (They) started laughing hard and were tearing up from laughter. I left the kitchen and felt humiliated.’

Miss Istanbouli texted friends to protest that that the chef had just ‘slapped my ass’ and complained to owner Hossein Torfinejad’s wife and daughter.

In a conversation with Mr Torfinejad she demanded that Mr Hussein be sacked or she would resign and then quit when he refused to do so. 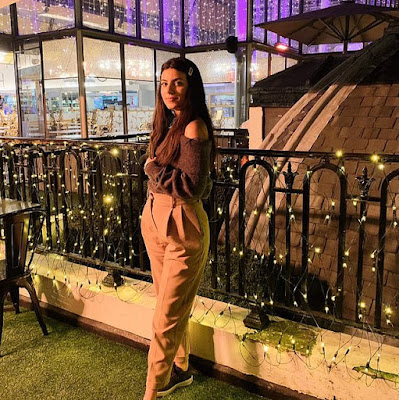 A week later the restaurant was forced to send Miss Istanbouli a legal letter asking her to stop the ‘campaign’ of negative reviews that it had started to receive.

‘Miss Istanbouli admits that she had some conversations with some friends, and some of her friends then wrote some bad reviews of the restaurant despite not having been to the restaurant,’ the tribunal judgement found.

‘(She) says she did not encourage them to do this. We find that lacks credibility. We conclude (she) was well aware of their plans to try to damage the restaurant’s reputation before they did so.’

The tribunal concluded that even though Miss Istanbouli – who now lives in Saudi Arabia – could be seen smiling after the bottom slapping incident it had been an intrusion that had impacted upon her dignity and caused her to feel humiliated.

It ordered the restaurant to pay her £8,600 compensation for injury to feelings and a further £476 for breaching employment regulations.

All the Juice: See why new Big Brother Naija housemate, Dorathy is trending on Twitter