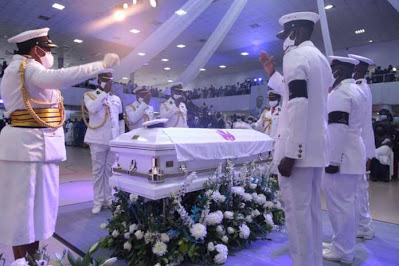 Pastor Enoch Adeboye, the General Overseer of the Redeemed Christian Church of God has said his deceased son, OluwaDamilare Adeboye is resting in glory.

Pastor Adeboye said this today in his message to the youths of the church and the entire Redeemed Church community at the farewell service of the late pastor,CityNews Nigeria reports.

The General Overseer appreciated everyone who was concerned about the death of Pastor Damilare saying that the pastor is in a better place now.

Pastor Adeboye reminded everyone that people die both young and old noting that it is not about how long but about how well.

He said Jesus Christ died at the age of 33 plus and John the Baptist did not clock 34 years old before he died yet he is the best of all men, quoting the old testament.

Daddy GO as he is fondly called acknowledged that the church has lost a champion and said the death of the Youth pastor should be seen as sowing a seed and all be ready for a special harvest.

He called on the Redeemed community to join forces together to produce many other champions like the late Pastor Damilare.

Pastor Adeboye said the church of God marches on and said mighty things are coming.

He said for every examination, there must be a promotion, and the tougher the examination the higher the promotion.

Daddy GO said the incident has been a tough one and the community has passed.

Pastor Adeboye once again encouraged the community to join forces together to win more souls for Christ like never before after the demise of his son.

CityNews recalls that Pastor Damilare died in his sleep on Tuesday, May 4, 2021. He is survived by his parents, Pastor and Pastor (Mrs) Adeboye; siblings; Adeolu, Temitope, Akin, Oluwagbemileke, and Titilope wife; Temiloluwa and Children; Oluwatishe, Ireoluwa, and Araoluwa.

Breaking: Hisbah Opens Up On Why Bauchi Prostitutes Must Return Home