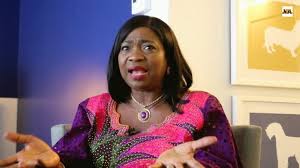 Abike Dabiri-Erewa, Chairman of the Nigerians in Diaspora Commission (NIDCOM) has noted that the President of Ghana, Nana Akufo-Addo may be unwilling to go against the people of the country very close to another presidential election in the country.

The NIDCOM boss made this view known on Monday while speaking on the current predicament facing some Nigerian businessmen in Ghana whose shops have been shut down.

Despite intervention efforts by the Nigerian government at many times, the shops of many Nigerians operating in Ghana are under lock and key as they have been objects of frequent attacks by some Ghanaian traders who said they don’t want the Nigerians to remain in their countries.

Some of these Nigerians have been in Ghana for over 20 years, making it difficult for them to just uproot and leave the country.

However, Dabiri who made her submission on Monday when she appeared on the Channels TV Sunrise Daily programme noted that the President of Ghana might not want to go against his own citizens very close to another election scheduled for December 2020.

READ ALSO:See What Kwarans Did To Saraki As He Arrives Ilorin For Dad’s Remembrance(Video)

But she noted that the administration of President Muhammadu Buhari will continue to engage the authorities in Ghana with the aim of resolving all issues of concern.

“Let’s face it, the President of Ghana will not want to go against his own citizens,” she said. “And majority of the Ghanaian traders have said ‘we don’t want them’. So after the elections, maybe they will now open. But they will close again. So they can’t be pawns in a game of chess in Ghana,” Dabiri-Erewa noted.

Meanwhile, as earlier reported by Naija News, at least three federal ministries – Foreign Affairs, Interior, as well as Trade and Investment will be taking fresh actions this week as regards the attacks on Nigerian traders in Ghana.