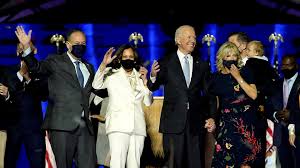 A Social Commentator and Public Affairs Analyst, Jumu’ah Abiodun, has congratulated the United States President-elect, Joe Biden and Vice President-elect, Kamala Harris on their victory in the 2020 election.

In a joint letter to both of them via his Twitter handle, the analyst said that their victory is sweet for young and senior Americans as well as their political allies around the globe. “It gives me the honour and pleasure to extend to Your Excellency my sincere congratulations and warmest wishes on your victory as the 46th president of the United States and first female Vice President, Kamala Harris,” Jumu’ah stated.

He expressed further that: “I have followed your campaigns for months alongside my mentor, President Barack Obama and always excited to listen to your action based discussions of repositioning America. You have always impressed me with your clear vision and ability to get the job done against the most formidable opposition, President Donald Trump.”

“Your Excellency Sir, your victory is sweet for young and senior Americans as well as your political allies around the globe.”
Hailing Biden and Harris’ election, Jumu’ah said the victory over incumbent President Donald Trump, is historic, citing that generation unborn would be glad to read their story.

On the US relationship with Nigeria and other parts of the world, the pundit said: “The whole world specifically Nigeria and the rest of Africa, China, European Union, the United Kingdom and the Middle East are looking forward to working with you to further strengthen our economy, political and diplomatic relations.”
“I am confident that, with your wealth of experience we can realise much of the potential and possibilities for deepening our cooperation in all areas for the mutual benefits of Nigeria and the United States and their peoples.”

The activist also advised President Trump to accept the outcome of the election and call the winners, “America has spoken. For me, nobody goes to the poll to lose, but there’s always one winner at the end of every race. In 2012 and 2015, Nicolas Sarkozy and Goodluck Ebele Jonathan lose their re-election bid respectively, today, they are the hero of democracy,” Jumu’ah said in a special tweet to President Trump.