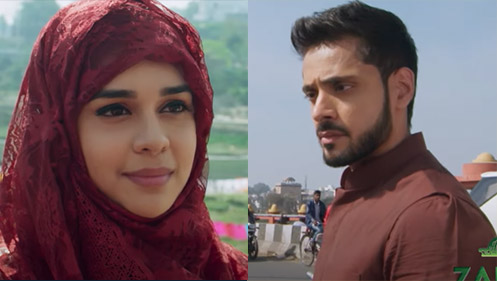 Tonight, Zee World fans will be watching a new series as the channel premieres the much talked about Zara’s Nikah, meaning: Zara’s Muslim Marriage.

The series which premieres at 20h00 tonight (Sunday, June 28) replaces the first season repeat of Gangaa, which replaced Ring of Fire during the lockdown.

A unique aspect of the show is that it spotlights a topic we seldom – if ever – see on TV: divorce customs in Islam.

The story centres around Zara Siddiqui and Kabir Ahmed, who are devout Muslims who interpret Islam differently.

They’ve both recently completed five years of Islamic study and while returning to their hometown, Lucknow, they have a major argument about the Triple Talaq.

Triple Talaq is a controversial divorce custom in Islam – there are various different divorce customs – and Zara strongly opposes Kabir’s acceptance of it.

Triple talaq is the practice under which a Muslim man can divorce his wife by simply uttering “talaq” three times.

Their disagreement on it creates such an online viral stir that they end up in a situation where they’re forced to marry.

They don’t love each other, but they do, in a way. Their love grows but of course, the series wouldn’t have hundreds of episodes if it was as simple as that.

They marry and then stuff happens, including Triple Talaq.

The show first debuted on Zee TV in India in 2018 and won five Zee Rishtey Awards in the same year, including Best Show.

And in August 2019, India made Triple Talaq a criminal offence.

Check out the first teasers for Zara’s Nikah for June below.

Zarah Siddiqui and Kabir Ahmed are returning to Lucknow after 5 years of higher studies in Islam. An argument breaks out in the train about Triple Talaq: Zara is against the practice and Kabeer is for the practice. The debate goes viral on the internet and catches attention of important people in Lucknow.

Sahil performs a prayer ceremony with Vedika but Bimla is against whole idea and wants Nidhi to perform the prayer with Sahil.

Shebaz is on the mission to dethrone the Kazi of the city and replace him with the person of his choice.

Premiere episodes of Zara’s Nikah air on Zee World from Mondays to Sundays at 20h00.

LASTMA Official Stabs His Lover, Kills Himself Over Infidelity