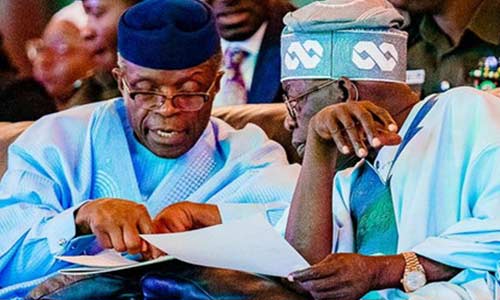 I write in reference to the article published by Africa Report in November 1, 2021, titled “internal Friction: Nigeria 2023: Will Tinubu Step Down for Osinbajo Again?” written by one Akin Irede.

According to the writer, one unnamed columnist allegedly asked on December 17th, 2014, “Who is Muhammadu Buhari’s running mate?” It might have been a tongue-in-cheek statement, but then Akin Irede knows how to spin a yarn to suit his questionable interests. In 2014, Prof. Yemi Osinbajo, SAN, was already renowned in some circles, having being Lagos State Attorney-General and Commissioner for Justice. Also, as Professor of law and lecturer at the University of Lagos, Osinbajo had lectured several brilliant minds now making waves in the legal profession. He was also responsible for many judicial reforms in Lagos State that has become a template in many other states nationwide.

The real question is: who is Akin Irede and what are his motives against Vice President Yemi Osinbajo, SAN? Does he have any vested interests in trying to create divisions and rancour where there are none whenever he writes about Prof. Osinbajo and Asiwaju Bola Ahmed Tinubu?

Curiously, almost everything the writer mentioned above has written for Africa Report is focused on Osinbajo and Asiwaju. It warps narratives that tries to pit the VP against Tinubu in lieu of the presidential elections in 2023. This is despite knowing fully well that Asiwaju and Osinbajo have a bond of friendship and mutual respect that has remained unshakable for decades. By the way, between 1999 and 2007, Osinbajo served as AG and Commissioner under Asiwaju’s two-term tenure as Lagos State governor.

That Tinubu was the one that put forward Osinbajo’s name to become running mate to President Muhammadu Buhari is no secret. That they share a

mutual bond is no secret. But that there is a perceived “struggle to succeed President Buhari in 2023 between Vice-President Yemi Osinbajo and his mentor, Bola Tinubu,” is not true as the writer alleged.

VP Osinbajo, has proven time and time again his loyalty and service to God and country. As deputy, President Buhari has praised him on many occasions for these telling attributes, as well as his dedication to the nation. Asiwaju himself has said the same on different occasions.

That President Buhari introduced him as ‘Prof. Yemi Osunbade’, was simply a mistake in getting the correct name spelling, but not that he didn’t know who would become his deputy.

The emergence of Prof. Osinbajo as President Buhari’s running mate was that hands of destiny at work, and since 2015 when he was elected alongside President Buhari for the first term, VP Osinbajo has continued to distinguish himself in his office as Nigeria’s number two citizen. A fact known to Irede, but one that he refuses to acknowledge.

Yes, Tinubu and Osinbajo’s names have been the most mentioned names in the APC as likely presidential candidates for the ruling party, but then, none of them have declared interests in running, despite campaign by support groups. In August 2020, during the virtual annual general conference of the Nigerian Bar Association (NBA), VP Osinbajo said: “I am incredibly grateful for the opportunity to serve Nigeria and right now I am focused on doing just that.”

In May 2021, the Office of the Vice President has publicly issued a public statement denouncing the VP from any campaign on his behalf by any support group. It noted that the VP “was rather focused on working in his capacity as vice president in the current administration to address all the compelling issues in the country and concerns of Nigerian…”

Again, Osinbajo’s focus is on service to Nigeria and not on 2023. But according to Irede, “Sources within both camps tell The Africa Report that since the race began to intensify, the two politicians have not been as close as they used to be.” How laughable. The sources failed to tell him that the relationship between Tinubu and Osinbajo remain as strong as ever. Where was this source when both men met in Abuja recently and shared warm embraces and discussions Ion October 29, 2021?

That Osinbajo did not visit Tinubu when the latter was in London on medical vacation was not because of any strain in their relationship or perceived rancour. The VP stayed in touch with Asiwaju, despite his many engagements and activities. Also, the President had visited Tinubu.

The biggest lie of them all by this Irede writer is that Osinbajo confided in an influential monarch in the South West about his alleged ambition to run for the 2023 presidential elections. Again, this is a fabrication of the imagination of the writer and his unnamed sources.

As a journalist, which I suppose he is, Akin Irede should understand the term “closed door meeting”, which the VP’s meeting with the monarch was. It goes without saying that Osinbajo is not the first or last politician to have had closed door meetings with any individual or group, it is common place. It is also his prerogative to decide to or not to grant press interviews afterwards. And it is not in every meeting that the VP grants media interviews. This is expected. But then, the Irede writer has his motives.  If Tinubu felt betrayed, as the writer falsely alleged, how come he and Osinbajo kept communicating all this while?

According to the writer, “two credible sources tell The Africa Report that Tinubu’s handlers advised him to leave London in order to avoid seeing Osinbajo.” Another cock and bull story. There was no ‘Abuja surprise’ in the meeting between the two men with decades of close relationship forged in mutual respect and friendship. The only surprise was that Irede’s sources were left gob smacked that their false narratives of a strain in  the relationship between Asiwaju and Osinbajo had in one swoop come crashing down like a pack of cards.

People in the know are well aware that such falsehoods emanate from the camps of those with selfish personal interests in 2023, just like the thread of skewed narratives by Akin Irede and his cohorts. There is no internal friction or strain between Asiwaju Bola Tinubu and Prof. Yemi Osinbajo, SAN. Period. For emphasis, VP Osinbajo is not, and has never been desperate for power. He is solely driven by dedication and service to God and country.