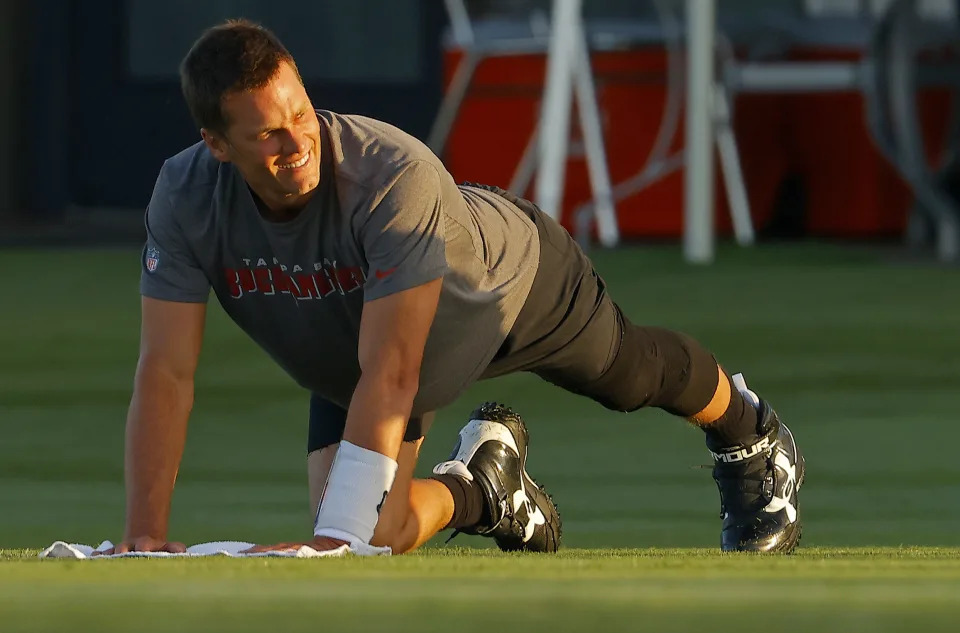 Tom Brady‘s wellness company CEO has described ‘the No.1 one thing that you can do’ to be in the right shape.

The Buccaneers quarterback played in his 47th NFL playoff game on Sunday, 20 more than the closest quarterback on the all-time playoff appearance list. And at 44, Brady is older than every opposing head coach he could have faced on his path to an 11th Super Bowl appearance.

In 2013, Brady co-founded a wellness brand called TB12 with longtime body coach and business partner Alex Guerrero to spread his body care knowledge with everyday consumers through “The TB12 method.”

“Our whole TB12 method really centers around the notion of muscle pliability,” TB12 CEO John Burns said on Yahoo Finance Live (video above). “And we specialize in a deep-force tissue work to help you lengthen your muscles and then make your muscles more resilient and allow you to move without restriction. So anyone out there, as you’re exercising and taxing your body through even activities of daily life, your body has a tendency to get more tense, get more dense, have restrictions of movement. So we recommend to everyone, focus on your pliability. … So really focusing on your muscle pliability is probably the No.1 one thing that you can do.”

TB12 defines pliability as “muscle state which is supported by balanced nutrition, optimal hydration, mental fitness, and functional strength and conditioning.” Given the focus, The TB12 Method tends to avoid heavy weight-lifting regimens.

“The reality is doing that makes your muscles and your body more tight, more dense, more restricted in movement,” Burns said. “So we espouse exercising in a way that supports your sport, supports your activities, but doesn’t do it at the expense of pliability. So we’re big fans of working out with resistance bands, bodyweight, things like that.”

And while some experts doubt the soundness of focusing on muscle pliability, Brady is put forward as the method’s exemplar.

“It’s working for Tom,” Burns said. “It has worked for Tom for a long time, and he’s really our pinnacle case study in it. He either leads the NFL or close to leads the NFL in every major passing category at the age of 44 this season. It’s extraordinary.”

READ ALSO:   US Justice Dept releases memo behind Barr's decision not to prosecute Trump for obstruction

TB12’s bet is that all kinds of people can benefit from what Tom Brady has learned about longevity.

“The TB12 method and our business is really his lifestyle,” Burns said. “And aside from the commercial interests, obviously, of building a business, the opportunity to change people’s lives is super important to him.”

Josh is a producer for Yahoo Finance.