Home Breaking News Breaking: Panic As Nurse Tested Positive To Covid Despite Getting Her First... 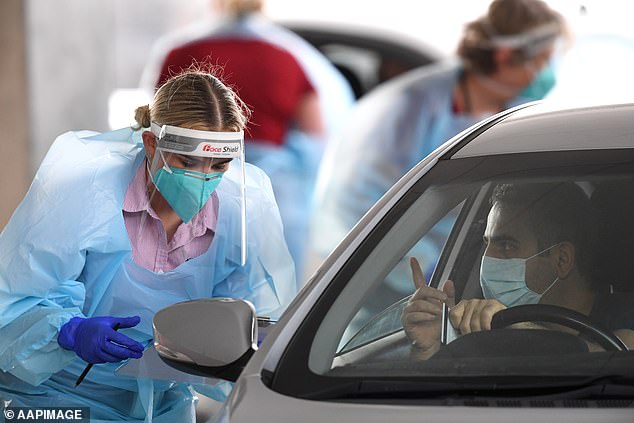 A nurse at a Brisbane hospital tested positive for Covid-19 less than a week after receiving her first vaccination because it takes at least seven days to build immunity.

The health worker from Princess Alexandra Hospital was one of two new local cases in Queensland on Wednesday, while the other is one of her close contacts.

Chief health officer Jeanette Young said the nurse received her first dose on March 19 and the vaccine did not have time to kick in before she was exposed to the virus.

Genome testing revealed she has the same Covid strain as another nurse from the same hospital who tested positive earlier this week.

Authorities are trying to determine whether the women caught the virus while working in the same ward.

‘She was tested as part of the asymptomatic screening testing process for that ward and was found to be positive,’ Ms Young said.

‘She has since developed some symptoms, but she was part of that testing.’

Premier Anastasia Palasczcuk said there was one new case in hotel quarantine recorded overnight, bringing the total number of new cases up to three.

She added the lower case numbers than Tuesday – when eight local cases were recorded – raised hopes Brisbane’s three-day lockdown may end on time at 5pm on Thursday.

She said she would decide whether or not to extend Brisbane’s restrictions on Thursday morning when officials have the most up-to-date information.

‘This is very encouraging and we’ll be providing you with an update again tomorrow at 9am, and fingered crossed, all will be looking good for Easter,’ she said.

‘If we see very good testing rates across Queensland and we don’t see any unlinked community transmission, the signs for Easter are looking positive.’

The announcement came amid fears more than 2.5 million Brisbane residents are almost certain to remain in lockdown through the Easter long weekend.

Greater Brisbane residents were ordered into a snap lockdown on Monday afternoon, while hundreds more around the state who have visited the city since March 20 remain under orders to stay at home and self-isolate.

READ ALSO:   Man Emptied Bag Of His Own Faeces On Neighbour

Queensland Health on Tuesday evening confirmed the Princess Alexandra Hospital has been placed into lockdown as a precaution.

Chief Health Officer Jeannette Young has left open the door to expand the lockdown to other regions.

‘The message here is that people should be on alert, no matter where they are in Queensland,’ Dr Young said.